March 7, 2016 – An accident occurred at the intersection of Nielson Street and Dinsmore Avenue in Far Rockaway, just a block away from M.S. 53 and approximately two blocks from P.S. 253. 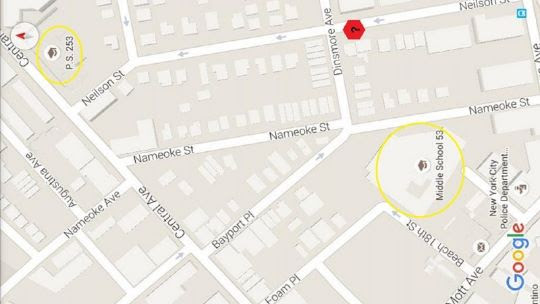 This Google maps shows the site of the accident, which is in close proximity to two public schools.

The accident occurred around 3:20 p.m. According to eyewitnesses, a white van was traveling about 40 miles per hour in a 25 mile an hour zone. A driver, a local resident who was only identified at “John”, was at the stop sign on Dinsmore Avenue. After looking both ways, he proceeded through the intersection. A white minivan that was speeding down Neilson struck John’s SUV. The impact caused the SUV to crash into another vehicle that was parked on the same block. 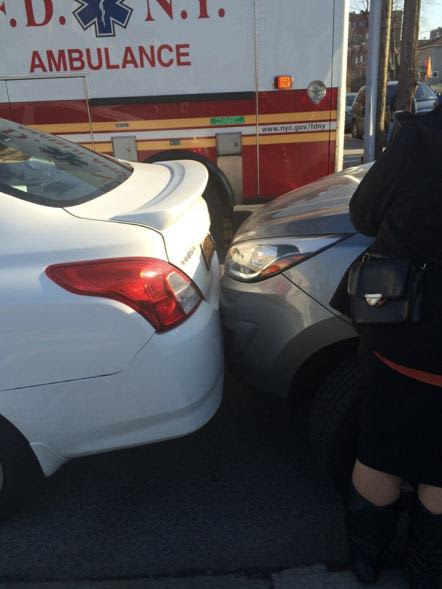 The aftermath: The SUV was struck and forced into this white sedan.

Witnesses in the area provided the following quotes to Rockaway Primetime:

“We were walking on Dinsmore Avenue and Nielson Street and we saw a white van flying down Nielson. I turned around because we heard a huge boom,” said Jose Rivera.

Another witness, who chose to remain anonymous, stated, ”Two people were injured, but their injuries were considered to be minor and they’re going to be okay.”

One of the victims in the crash, who did not want to provide comments, was released from St. Johns Hospital with minor injuries. Other victims were treated for their injuries and released.

Residents and those involved in the accident are demanding that city officials place a stop sign at the intersection. Many of them told Rockaway Primetime that if a sign had been there it would have prevented the accident.

The Department of Transportation (DOT)  was contacted about placing a stop sign in the area, but DOT has not contacted Rockaway Primetime — or those demanding that immediate action be taken — with a decision. The offices of State Senator James Sanders Jr.,  Councilman Donovan Richards and Community Board 14 were also contacted, but none of the representatives have taken definitive action to address the issue.

An email from Councilman Richard’s office stated, “I would like to thank you once more for reaching out to my office regarding your Department of Traffic issue. After reading your complaint, I understand the importance and urgency of the issue. I can assure you that I am doing my best to look further into it.”

A petition has been created and signed by over 40 supporters in effort to have the sign placed at the aforementioned location.

Th following comments were posted on the change.org petition/website by community residents.

“This is needed and should be taken care of NOW!” – Linda Ruscillo

“A STOP sign should be installed. Why wait for someone to get hit or even a possible accident at this location?” – Danny Ruscillo

“I’m signing because of the children and pediatric safety!” – Andrea Ross

Visit the following link to view the and sign the petition: https://www.change.org/p/new-york-city-department-of-transportation-put-a-stop-sign-on-neilson-street-crossing-dinsmore-ave-far-rockaway?recruiter=269727236&utm_source=share_petition&utm_medium=facebook&utm_campaign=autopublish&utm_term=des-lg-share_petition-reason_msg&fb_ref=Default
More Photos from the crash.