Far Rockaway, NY – In an effort to save a beloved family fun center from rising rents and crippling state bureaucracy, Assemblyman Phil Goldfeder (D – Far Rockaway) and Nassau County Legislator Howard Kopel (R – Lawrence) today called on the New York State Department of Transportation (DOT) to renegotiate steep Use & Occupancy fees applied to the Five Towns Mini-Golf and Batting Range on Rockaway Turnpike in Lawrence. The request came during a morning press conference with owner, Marty Rosen, that was held outside the popular local business.

“For nearly forty years, Five Towns Mini-Golf and Batting Range has provided wholesome fun and entertainment to thousands of families in our community, including my own,” said Assemblyman Phil Goldfeder. “Local businesses like these are the backbone of our economy and we must ensure that they continue to grow and thrive. I urge the state DOT to step up to the plate and ensure the Rosen family remains a part of our community for years to come.”

“This is a family-owned business that provides a unique service to the area.  We should be attracting local businesses, not forcing them out.  I am pleased to once again join Assemblyman Goldfeder in bipartisan advocacy for our community,” said Nassau County Legislator Howard Kopel.

During the press conference this morning outside Five Towns Mini-Golf and Batting Range, Assemblyman Goldfeder and Legislator Kopel called on DOT to renegotiate a 150% increase in Use & Occupancy permit fees applied to the small business beginning in April. The legislators warned state officials that the high fees could force the longstanding business to fail, leading to blight along the commercial district on Rockaway Turnpike. To back their claims, both Goldfeder and Kopel pointed to an adjacent former car dealership also in state DOT hands which, for the better part of the last decade, has stood abandoned and covered in tall weeds

Goldfeder and Kopel were joined by batting range owner Marty Rosen, who opened the popular family fun center back in 1978 under a month-to-month lease, revocable at any time, from the state, which owns the land as highway right-of-way. Rosen spoke about the challenges he and his children faced over the years as they worked to build and grow a thriving small business.

“We have overcome many obstacles,” said Five Towns Mini-Golf and Batting Range Owner Marty Rosen. “Road repair projects, constant traffic issues due to poorly-timed traffic lights and the devastation of Hurricane Sandy. Today we are asking the DOT to reconsider its demand and through a compromise allow us to continue to provide unique fun-filled experiences for years to come.”

The elected officials’ request comes after a year-long effort by Goldfeder to seek consideration for the local Rockaway and Nassau County institution. In August 2015, Goldfeder and Rosen met with DOT officials to request a compromise on an impending use & occupancy fees increase from $4,700 per month, to $12,435 per month beginning in April 2016. The meeting also focused on an earlier request by Rosen to seek a long-term Use & Occupancy permit to provide the business additional stability in its recovery from Superstorm Sandy.

In June, Rosen appealed the permit increase, arguing that extensive roadwork, poor traffic light controls, economic downturns and Hurricane Sandy negatively impacted the business. In response, the DOT regional office wrote to Rosen on July 27, 2016 explaining that it was “constrained to consider only market value” when setting permit fees, and that the appeal was denied.

First opened in 1978, the Five Towns Mini-Golf and Batting Range has served thousands of families in New York City and Long Island. Over the years, the facility has hosted countless summer camps and birthday parties, as well as visits by baseball greats like Daryl Strawberry and Mookie Wilson.

In recent years, the Rosen family and other business owners in the community have seen their businesses affected by the devastation of Superstorm Sandy and deteriorated roadway conditions along Route 878 and the Rockaway Turnpike. In 2014, Goldfeder and Kopel joined U.S. Senator Charles Schumer in calling on state DOT to expedite long-awaited repairs to the major thoroughfare and evacuation route. The project, formally called the NY 878 Nassau Expressway Operational Improvement, isn’t expected to be completed until 2021. 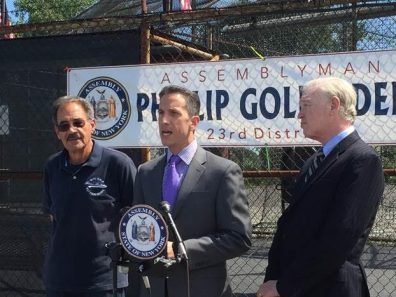