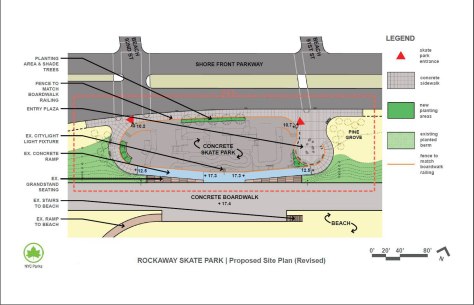 Above is the schematics of the new Rockaway Skate Park which includes fences, plazas, grandstands, new entrance ramps and planting areas.

Parks and Safety Committee held a meeting Monday night to discuss various upcoming parks projects for the Rockaways. One that stuck out- was the long awaited Rockaway Skate Park.

The good news is during the meeting- NYC Parks Administrator Portia Dyrenforth announced the 5 million dollar Rockaway Skate Park Project to begin construction Fall of 2017. Beginning a new era for Skaters across the Rockaways.

Primetime asked Dyrenforth about concerns of dangerous wood for the current temporary park. “We are aware and are going to replace the wood”.

John Cori, a member of the Parks and Safety Committee stated that he will also help with replacing and smoothing the foundation for skaters along with Parks.

The project is expected to be completed Spring of 2018.