After Hurricane Sandy ravaged the Rockaways in 2012, the coastal neighborhood in Queens underwent a renaissance of sorts.

And this spring, the final slab of concrete was laid on a new five-and-a-half-mile boardwalk, with Mayor Bill de Blasio proclaiming its completion a symbol of the area’s resiliency.

“This boardwalk is planted firmly, and it will withstand whatever Mother Nature throws at it,” Mayor de Blasio said on a windy Friday in May.

But the government’s most ambitious plan to shelter Rockaway from the elements is far from assured.

An Army Corps of Engineers project that includes flood walls and levees, and that would significantly enhance the peninsula’s lines of defense against rising sea levels and devastating storms, would cost $4 billion, a hefty price that many observers believe leaves the plan’s future in doubt.

An estimated $400 million has been secured so far, Army Corps engineers said. But that money cannot be used until the agency gives the project the final approval.

Construction would not begin until 2020.

“With the Trump administration in place, people who don’t necessarily even believe in climate change, I’m really worried whether the money will even be there,” said Councilman Donovan Richards, a Democrat whose district includes parts of Rockaway.

Rockaway, like many coastal neighborhoods in New York, is extremely vulnerable to water. More than 120,000 people live on the Rockaway peninsula — a slender mass of land that stretches across 10 miles with the ocean to the south and Jamaica Bay to the north.

One recent report by the Waterfront Alliance estimated that 61 percent of Rockaway residents, or 74,800 people, had a one-in-two chance of a major flood in their homes by 2060.

“This is the story of our time,” said Robert Freudenberg, the vice president for energy and environment at the Regional Plan Association, an urban research organization. “Adaptation will require one of the biggest investments that we’ll need to make in the region.”

On the beachside of the peninsula, the Army Corps has proposed building 13 new jetties and extending five existing jetties — rock formations that jut out perpendicularly to trap sand and build up the beaches they protect.

Sand is widely regarded as an effective mitigator of storm damage: A wider beach can dissipate the energy of storm tides.

But a significant amount of the sand replenished in Rockaway by the Army Corps in 2014 after Sandy has already been washed away. In certain sections of Rockaway Beach, the water has eaten away at the shoreline, reaching the sand dunes and the boardwalk that shield the neighborhood.

Jetties are meant to slow this type of coastal erosion, a natural phenomenon exacerbated by climate change, experts say.

“We are working as fast as we can, and we understand the urgency of it,” said Daniel Falt, the project’s manager at the Army Corps. “We have a very significant and thorough review process that is required from us” 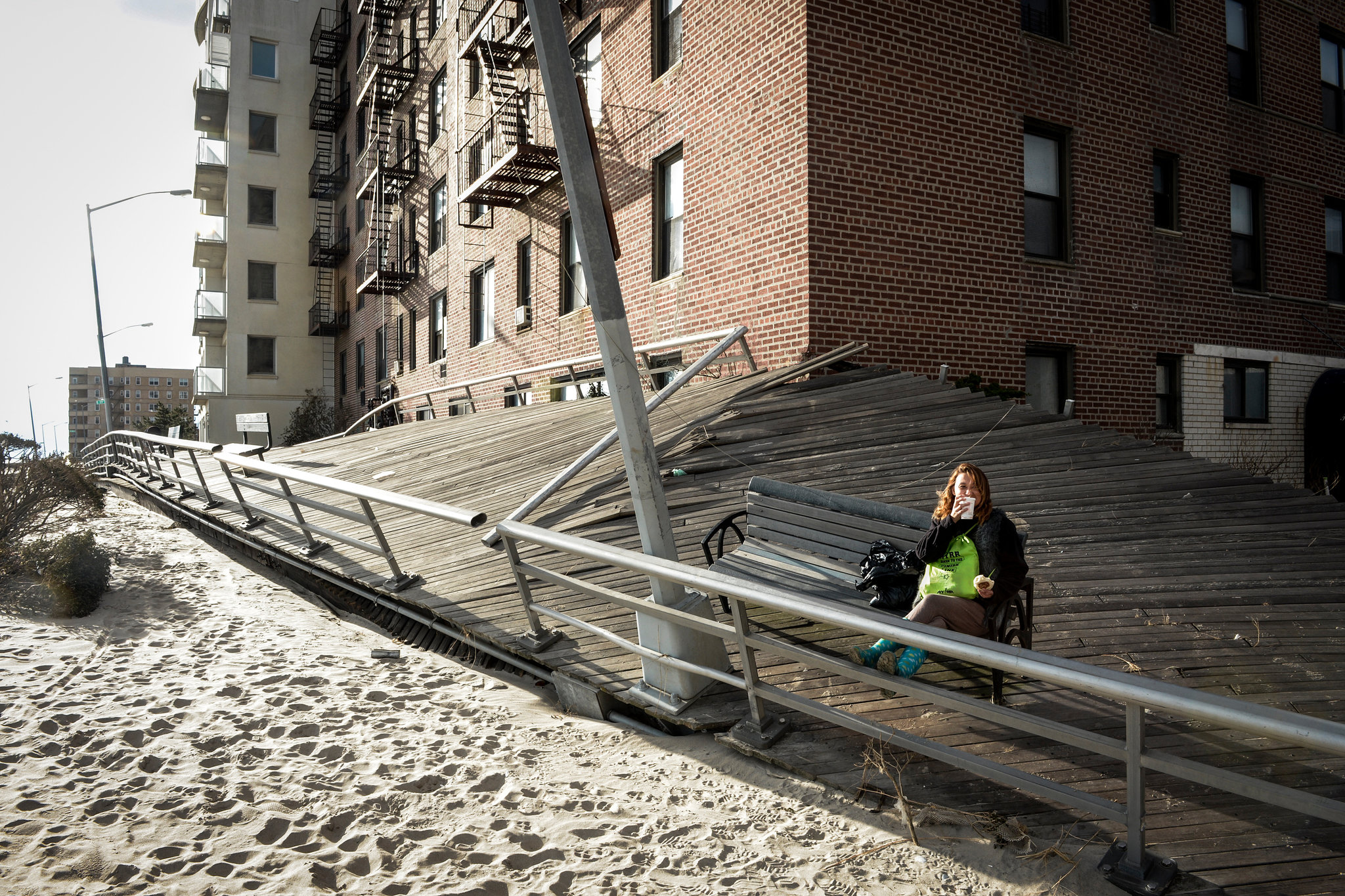 A young woman sat in front of her building in the Rockaway section of Queens a week after Hurricane Sandy hit the coast in 2012. Credit Robert Stolarik for The New York Times

“There’s no reason to leave Rockaway vulnerable when federal funds are available now for measures that can provide protection during future storms,’’ Mr. Schumer wrote in a letter to the Army Corps last month.

Indeed, agency officials acknowledge that the $400 million the agency already has in hand would pay for the work on the beachside.

The other $3.6 billion needed would pay for a proposed system of flood walls, levees and gates to control water levels in Jamaica Bay — a side of Rockaway mostly overshadowed by the beachside.

Though the vulnerability of the peninsula’s northern part became starkly clear when waters leapt over the bay and left houses four to 10 feet underwater during Hurricane Sandy, there have been virtually no improvements to the bayside since the storm.

“All of these neighborhoods, tens of thousands of people, will just get flooded again from the back in another Sandy event,” said Dan Mundy Jr., who lives on the bay and is the president of the Broad Channel Civic Association. “All our hopes are on the gate.”

Funding for improvements on the bayside could be appropriated through the Democrats’ proposed infrastructure plan, which suggests allocating $25 billion to resiliency projects, Mr. Schumer’s office said.

But the specifics of a large-scale, national infrastructure bill would most likely be determined by Republicans, who control Congress. Neither the Trump administration nor the Republicans in Congress have presented such a plan.

Rockaway residents acknowledge the post-Sandy improvements in their neighborhoods, but are bracing for the worst, wondering whether measures taken so far are enough to protect the community.

One of the most significant improvements was the city’s $341 million project that replaced the obliterated wooden boardwalk with a concrete promenade, which also serves as a storm barrier. The new boardwalk has a steel-reinforced concrete deck, a higher elevation and a retaining wall underneath it to prevent sand from spilling into the community.

Yet, some noted that the reinforced boardwalk does not extend to the western half of the peninsula.

“That concrete boardwalk will be there for a long time,” said John Cori, a 54-year-old Rockaway resident who is the president of the Rockaway Beach Civic Association.

“Our homes will be gone, but we’ll be able to come back and walk the boardwalk,” he added, half-joking.

As the federal government slowly unfurls its long-awaited construction in Rockaway, the city points to other federally funded initiatives. A $120 million project would finance the construction of recreational parks designed to be more resilient than those destroyed in Rockaway during Sandy.

But, ultimately, city officials are looking at the federal government to do the heavy lifting.

“The short answer, I think on this, is that we really need our federal partners to step in here,” said Michael Shaikh, the deputy director for external affairs for climate policy and programs at the mayor’s office. “This is a huge, gigantic project.”