“Emunah of America does such wonderful work,” said Pheffer Amato.  “It was a privilege to speak in front of a vibrant group of individuals whose goal is to help the less fortunate in Israel.  I wish them much continued success!” 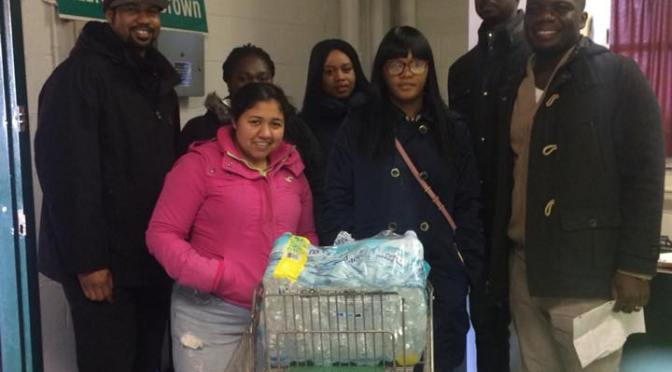 The following is an excerpt from the Giving the Gift of Love (GTGOL) organzation.

“The Rockaway-based non-profit ‘Giving the Gift of Love’ began in 2011 and was created by young people to serve and give back to the community.”

According to its website, GTGOL has held well over 20 charitable events and givaways throughout Rockaway and Marksville, Louisiana.

On Thanksgiving, the organization provided food to residents of the Beach 40th Street Housing complex. Although the objective was to provide a hearty meal for family members and their friends, emphasis was also placed on creating an atmosphere of appreciation, love and, most importantly, gratitude.

GTGOL has been serving to the families of the 40th Street Houses since the day they’ve started. The organization has a proven track record across Far Rockaway in providing consistent, and valuable services to needy families across the Rockaways.

Residents were invited to 433-A Beach 40th Street, which is commonly referred to as “The Red Building”, from 12p.m. to 3p.m. to usher in the holiday season. 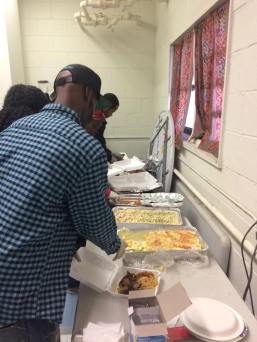 GTGOL also delivered plates of food and water to home-bound residents, and many of them were overjoyed when they received the meals and shared them with their families.

I just feel the need to speak about how many other people have been exposed since Harvey Weinstein. Anyone who knows me well knows that I have watched The Today Show for my entire adult life, day in, day out and that I’ve had a big crush on Matt Lauer. I even took my kids to stand in the audience at the Today Show.

It’s also worth noting that of the best celebrity interviews I ever saw was Charlie Rose interviewing Bruce Springsteen. Now here we are and both of these iconic journalists have been exposed as sexual predators. Both of these talented men used the power afforded to them by their position in the media to prey on women with less power. All of a sudden we are told that everyone knew and the fellow members of the media kept the curtain closed, but it took one person to come forward and speak out and these men lost their careers and thus, the power that they were able to wield over others. This leads me to have two thoughts.

The first is that it is wonderful that this groundswell of women finding their voice can lead to more and more women speaking out and if you are reading this and need to speak I will listen and advocate for you. Second, vote. Apparently, it’s not enough to come forward and speak your truth when it comes to elected officials, so going forward we must vote. We must vote in every election and vote with our hearts and our collective conscience.

We must not allow predators to continue to be elected and we certainly must not allow them to remain in office. Women, coming forward and standing strong, are getting predators out of the media. Women, voting for candidates that see women as equals who should never be objectified or preyed upon, can get predators out of our elected offices at every level.
Please keep fighting,

Earlier this month, Assemblywoman Stacey Pheffer Amato (D-Rockaway Beach) was recognized at a meeting of the Queens Chamber of Commerce for work helping facilitate the joining of the Chamber with the Rockaway Business Alliance, the group that formed to help drive local business growth around the time of Superstorm Sandy.  On the occasion of Sandy’s five-year anniversary, the Queens Chamber held their first meeting that formally included the RBA.

“The story of Sandy is one of self-help, of the will of a community to come together and rebuild,” said Pheffer Amato.  “Nobody exemplifies that spirit better than the RBA.  They help businesses grow and help them write their own stories of recovery and thriving.  The Queens Chamber, meanwhile, is incredibly innovative and energetic and has been a major driver behind the progress of the Borough of Growth.  It was my honor to help formalize the weaving-together of these two fantastic groups.  They’ve already brainstormed some great ways to collaborate at this first meeting, and I’m sure there will be many more.  I look forward to the future we’ll build together for the business community in South Queens!”

“The Queens Chamber of Commerce was honored to organize the 5th Anniversary Remembrance of Hurricane Sandy with the Rockaway Business Alliance,” said Thomas J. Grech, President and Chief Executive Officer of the Queens Chamber of Commerce. “I have been seeking an organizational business partner in the Rockaways since I came on board in 2015.  With the support of Assemblywoman Pheffer Amato, we came together as one at the Bungalow Bar and have begun working on a true partnership to assist and support the businesses that call the Rockaways home.  We look forward to future endeavors together.”

“Hurricane Sandy had devastating effects on the Rockaway community, effects that are still felt to this day,” said Theo Boguszewski, an associate with Perch Advisors, who helps manage the Rockaway Business Alliance. “However, it’s a testament to the incredible resiliency of this community that from this awful disaster, Rockaway has emerged stronger and more connected — this was evidenced by the event last Monday. The Rockaway business community has such incredible passion and desire to grow and overcome, and the Rockaway Business Alliance is honored to drive this collective effort.”

Oh, no! Another pipeline from Williams is among us. This time the pipeline will be no secret like last time.

Organizers like Food & Water Watch are conducting door-to-door outreach about the purposed project here in the Rockaways. For more click here http://co.williams.com/expansionprojects/

According to the group, “The bad news is that the proposed pipeline is dangerous, threatening our water, communities, and environment. The good news is that we have time to stop it, we’re working with great allies, and the Cuomo administration has clear authority block the project.”

The Williams energy company is proposing to build a 23-mile long pipeline that would carry fracked gas beneath New York harbor. The route of the pipeline runs along the coast of Staten Island, and then crosses the harbor south of Brooklyn and joins an existing pipeline four miles off the coast of the Rockaways.

According to Food & Water Watch, “Williams pipelines and compressor stations, in particular, have a safety record ridden with explosions, fires, and deaths.”

Rockaway Primetime Reporting doesn’t understand why local media across Rockaway and Coney Island has not made the public aware of this project in its entirety as of yet.

Although there is opposition from Governor Cuomo’s Administration. We can never be so careful after the first pipeline was signed and approved by the Obama Administration. Both Administrations claimed to be fighting climate change but approve such projects like Williams.

Time will only tell.

Listen out for your doors Saturday.

Where: We’ll meet at Beach 67th St on the boardwalk in Queens. Take the A train.

What: 11 am: Everyone meets on the boardwalk for a briefing about the Williams Pipeline. We’ll provide a script, a map, materials, and tips on how to be an effective canvasser. We’ll practice in small groups, and then send folks in pairs to nearby streets to knock on doors. People are not required to stay all the way until 4pm, but are encouraged to arrive at 11 to receive the group training and knock for as long as they like.